The use of ethers reduces emissions, benefiting the environment’s air quality.

Specifically, the use of methyl-tert-buthyl-ether (MTBE) and ethyl-tert-buthyl-ether (ETBE) enables a more complete fuel combustion, resulting in air quality benefits that include the reduction of specific pollutants limited by law, such as carbon monoxide (CO) and unburned hydrocarbons (HCs), as well as other serious pollutants such as particulate matter (PM) and ground-level ozone (O3).

Studies commissioned by the California Air Resources Board (CARB) and the U.S. Environmental Protection Agency (EPA), two of the world’s leading regulatory agencies, have demonstrated that the use of MTBE, in particular, reduces permeation—a key effect of evaporative emissions from a vehicle fleet—compared to both pure gasoline and gasoline blended with ethanol. As a result, the use of MTBE reduces the formation potential of, among other criteria pollutants, ground-level ozone.

Recent studies confirmed these laboratory findings, showing that lower ethanol use in gasoline has resulted in lower ozone levels in highly polluted cities such as Rio de Janeiro. Gasoline blended with ethers entails an even lower ozone formation potential than gasoline itself.

The extent of MTBE’s air quality benefits depends on various parameters, such as the percentage of blended MTBE, the presence of catalyst devices, the type and age of engine and the driving cycle. Nevertheless, there is general agreement among industrial and scientific communities on broad values, as reported in the chart below. 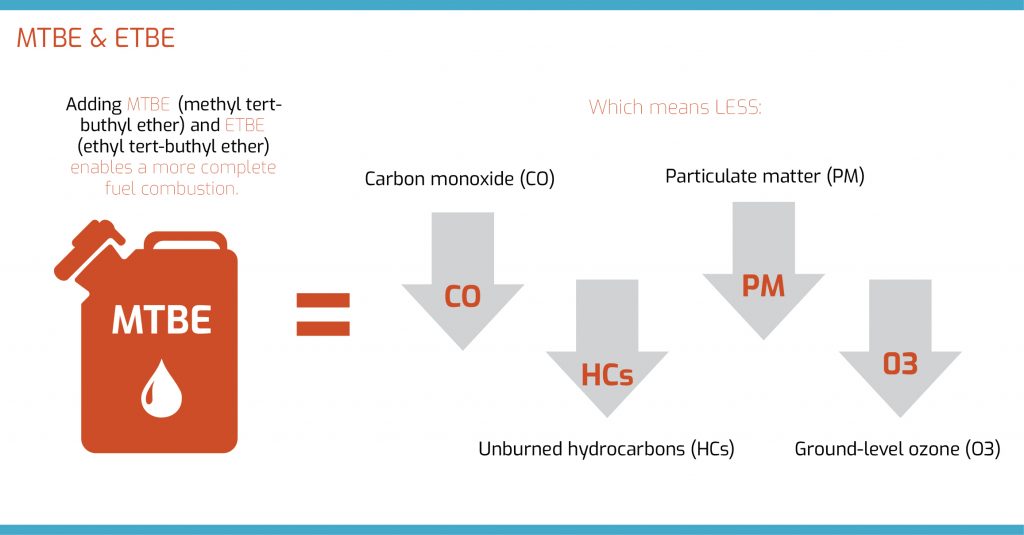 The following significant reductions of pollutants have been achieved through the use of reformulated gasoline containing 10-15% MTBE, compared to conventional gasoline: