Studies show the obvious advantages of using MTBE over ethanol as an oxygenate.

Researchers have indicated that MTBE, unlike ethanol, contributes to the reduction of evaporative and tailpipe emissions, which in turn benefits air quality .

Studies commissioned by leading regulatory agencies across the world demonstrate that the use of MTBE reduces permeation—a key contributor to evaporative emissions. The use of MTBE, thus, reduces ground-level ozone and airborne particulate matter formation.  For example, The Coordinating Research Council E-65 study (CRC E-65), commissioned by the California Air Resources Board, shows fugitive emissions with 11% MTBE gasoline were 12% lower than those with un-oxygenated gasoline.

In contrast, ethanol use significantly increases hydrocarbon permeation from fuel tank and gasoline distribution systems. In its 2014 Evaporative Emissions from On-road Vehicles in MOVES2014 report, the United States Environmental Protection Agency concludes that “ethanol was then seen to have a significant effect compared to E0 fuel (that does not contain ethanol)”. The table below, recreated from the study, summarizes those findings, according to the type of vehicle being used: 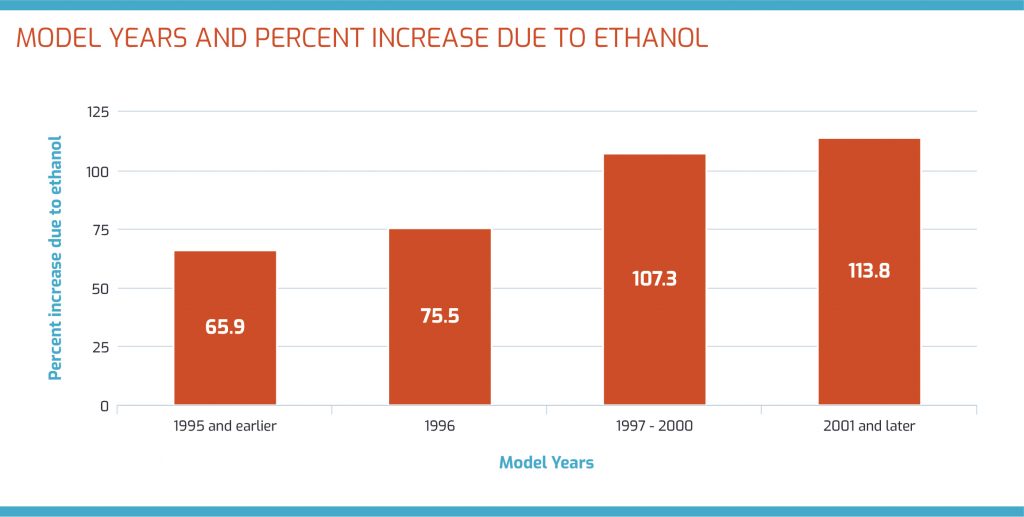 In addition to the detrimental effect of ethanol on permeation, the table also suggests this effect worsened as US vehicle fleets were modernized. Studies looking MTBE and ethanol simultaneously, such as the CRC E-65 study, show that gasoline blended with 6 percent ethanol increased VOC permeation by 70-74 percent in pre-2001 vehicles compared to gasoline containing 11 percent MTBE. They also show that fugitive VOC emissions could increase ground level ozone by as much as 55 percent when compared to MTBE-blended gasoline.

Finally, international studies whose methodologies are appropriate for analyzing tailpipe emissions (not fugitive ones), have shown that MTBE use also provides tailpipe emissions benefits when compared to ethanol. For example, a 2011 study from the Mexican Petroleum Institute (IMP) showed that, with 11% MTBE volume in fuels, formaldehyde emissions and acetaldehyde emissions decreased by as much as 17 and 29 percent, compared to fuels oxygenated with 6 percent ethanol by volume. Aldehydes, besides being carcinogenic air toxins, are also potent ozone precursors.

Ethers also vaporize faster during the cold-start cycle, during which 80 percent of PM is formed. 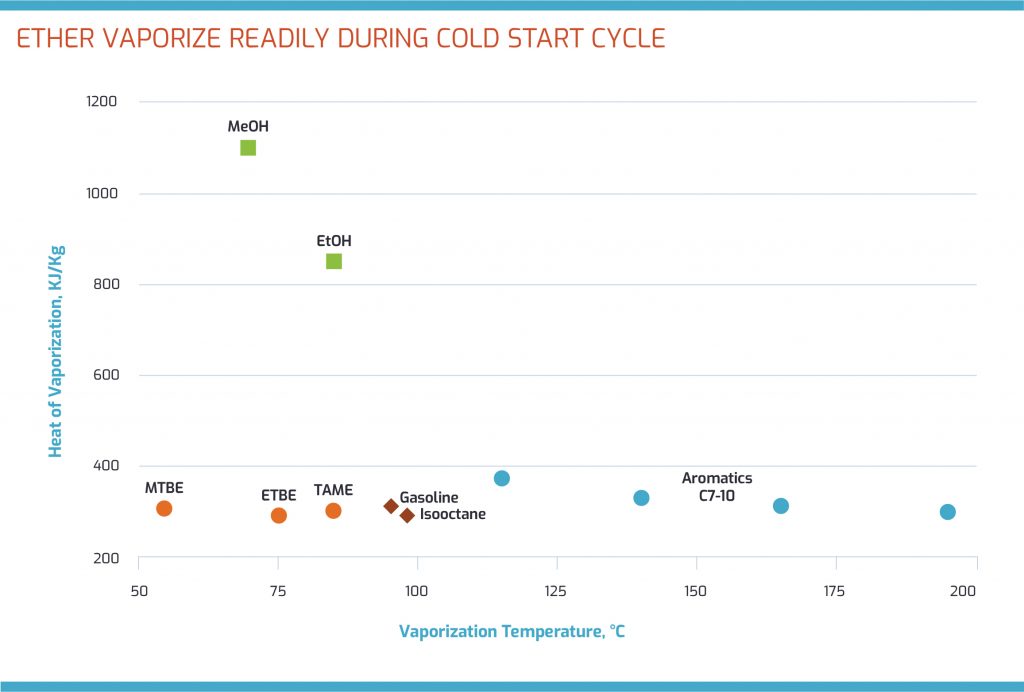 In addition to reports that look directly at air quality components, recent studies have challenged the notion that the use of ethanol, when compared to unoxygenated gasoline, reduces GHG emissions—even when looking at U.S. ethanol production, which is widely acknowledged as leading in terms of agricultural efficiency. For example, a 2016 study from the University of Michigan concluded that “when it comes to the emissions that cause global warming, it turns out that biofuels are worse than gasoline”. This represents one more data point that supports the fact that ethers are more “emissions efficient” than all other octane sources, including ethanol.

Click here for more information about what experts have said about the use of ethanol.