Throughout the entire production and distribution chain, differences in prices as small as a few cents per gallon drive business and consumption decisions.

In emerging economies, as competition and competitiveness rises, margins tend to shrink, exponentially increasing cost sensitivity for all parties involved. Within this increasingly competitive and cost-sensitive context, the demand for ethers—MTBE, in particular—is expected to grow significantly. In fact, over the next five years, ethers demand is expected to grow at a rate of 3-4 percent each year. Gasoline demand, as reference, is only expected to grow at 1-2 percent per year. This can be explained by two key facts: its low cost and its facility to be incorporated into gasoline.

With an average 38 cpg discount to its blend value, MTBE is the cheapest octane stream (compared to reformate and alkylate) in the US Gulf Coast, the region’s most prominent market of reference. 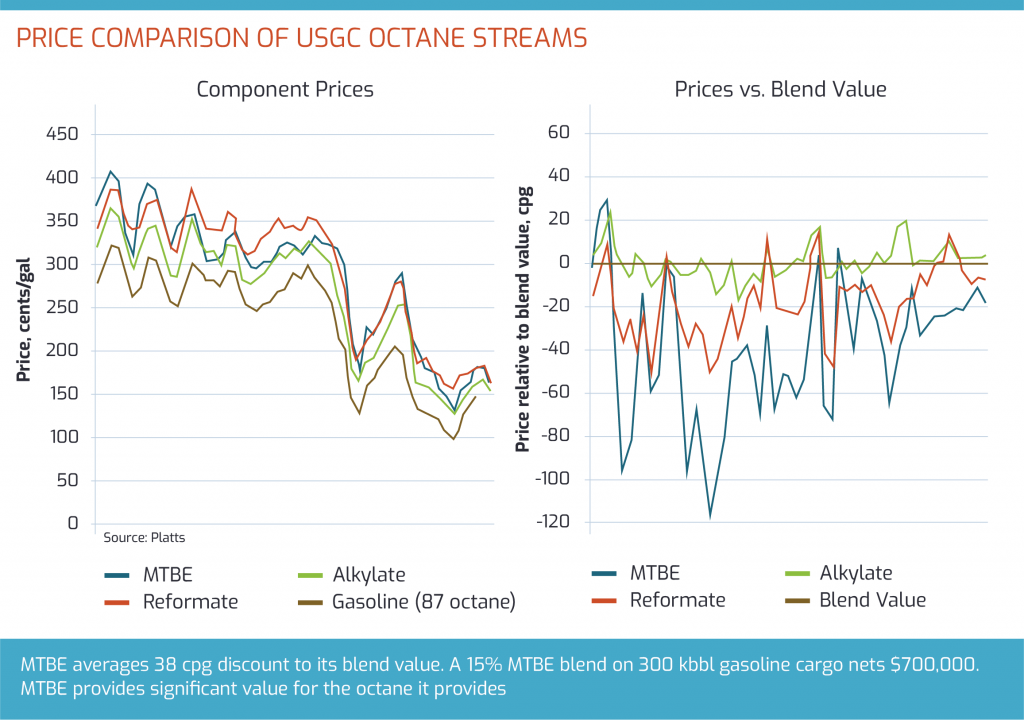 Facility to be incorporated into gasoline

Unlike ethanol, MTBE can be incorporated into gasoline at any point in the fuels production and distribution chain. In other words, the continued use of MTBE does not demand significant investments in parallel and additional infrastructure development and maintenance to accommodate for ethanol’s hygroscopic and corrosive nature.

Rise of Ethers and Gasoline Consumption

The following charts illustrate the expected increase of ethers consumption in different regions of the world, along with the anticipated growth of gasoline in those locations. China leads the rising consumption of ethers and gasoline, followed by the rest of Asia, and the Middle East. Latin America also presents a significant growth in its consumption of ethers, in line with its increase in gasoline growth rates by 2021. 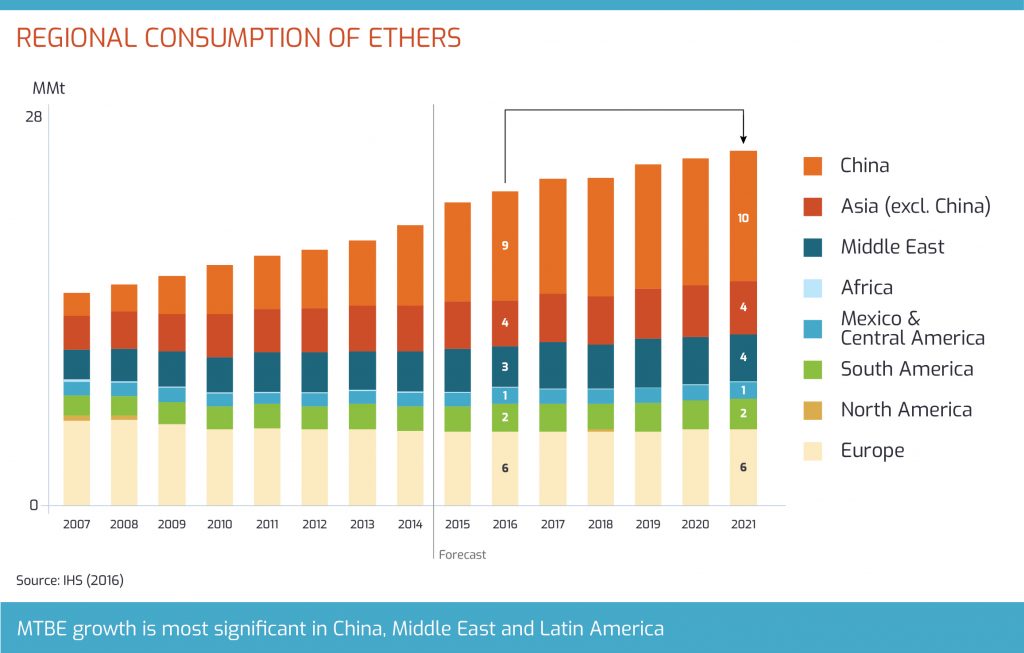 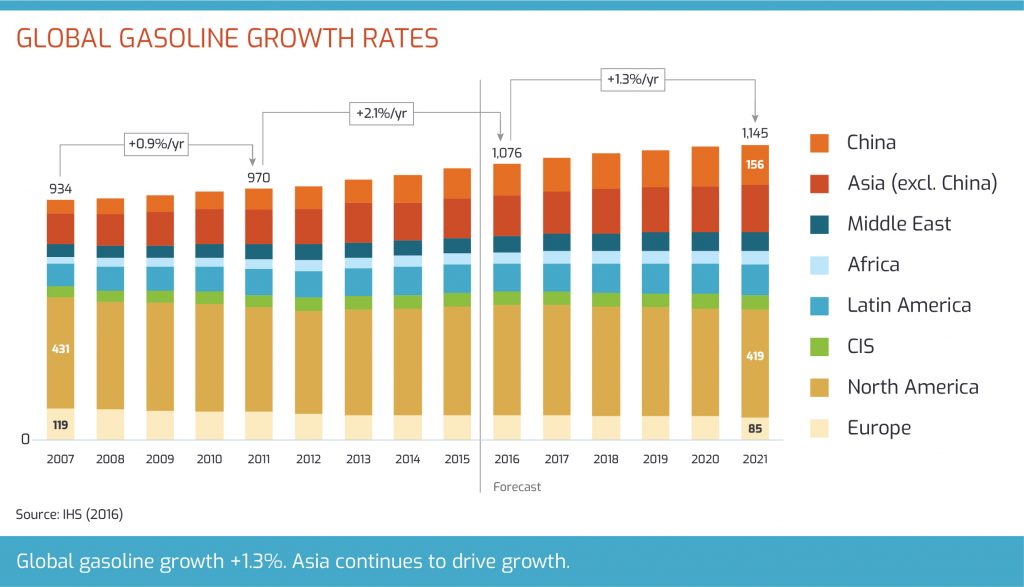 MTBE’s Efficient Use of Energy

Moreover, the efficient use of energy is a global priority that could drive as well the demand of ethers. As fuel oxygenates, ethers (MTBE, ETBE) improve fuel combustion, minimizing the amount of energy that is wasted as unburned hydrocarbons and, hence, maximize efficiency.

Fuel oxygenates are an excellent source of clean octane – significantly higher then reformate, alkylate or toulene. As an octane source, ethers have the added benefit of avoiding the regulatory hurdles that other components (such as toulene and ethanol) face due to higher blend Reid Vapor Pressure (BRVP), higher aromatics content, higher water solubility and higher oxygen content. In other words, the maximim octane content is subject to regulatory limits.

The nuanced view of octane, as detailed below, explains why ethers are the globally preferred oxygenate. It clarifies why ethers demand is expected to grow significantly, at roughly double the rate of gasoline demand over the following years. The following table below summarizes key blending properties of high octane components. 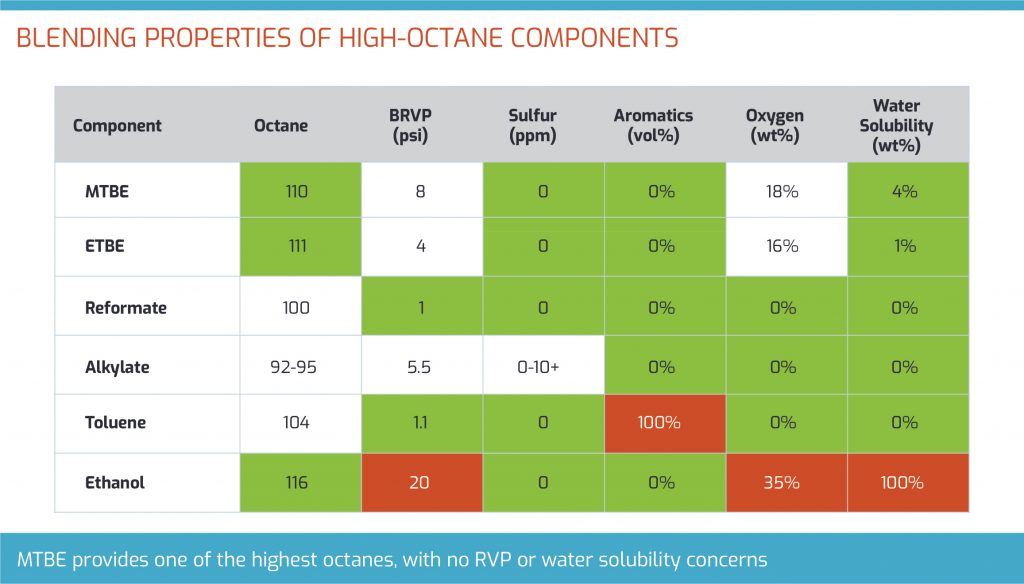 Compared to alcohols, ethers offer similar octane content. Ethanol, however, has a significantly higher blend Reid Vapor Pressure (BRVP) and significantly higher oxygen content than ethers. BRVP and oxygen content are typically regulated through maximum limits, which mean additional constraints for ethanol use. In addition, ethanol use entails water solubility concerns. In practical terms, this means that, unlike ethers and other fuel components, ethanol can only be blended into fuels in the final distribution phase. This translates into additional logistical hurdles, risks and costs for ethanol when ethers and ethanol are compared as sources of octane.